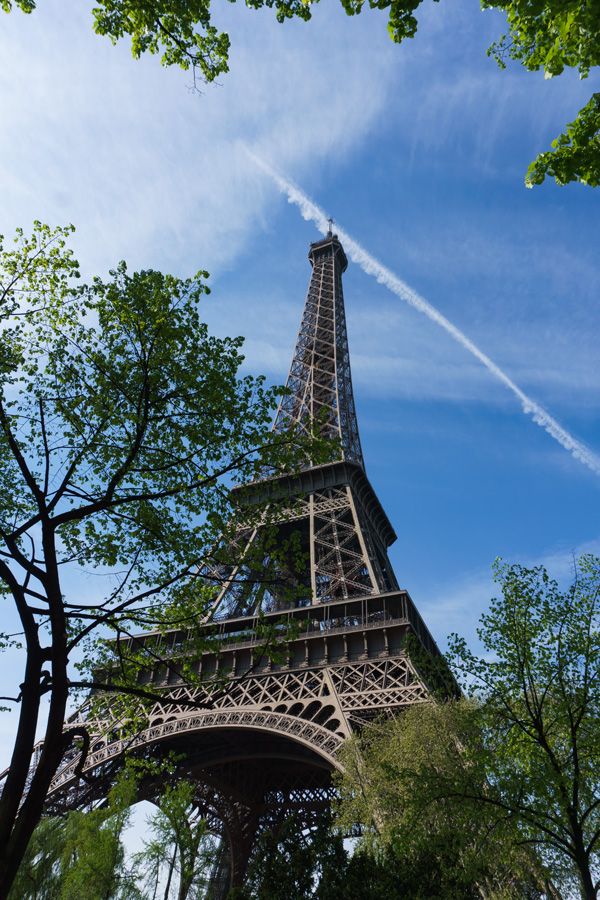 This last April my wife and I took a trip to Paris and Barcelona, something for which we have been planning and saving for a long time. In preparation for our trip, I wanted to make a bag that was water resistant. We heard that Paris can be rainy in the Spring, and we needed a way to protect a camera, and a place to stash all of the essentials for long days spent exploring. I also wanted a bag that was made with travel in mind. For me that means some outside pockets that are easy to access, and that inside the bag, there are enough pockets and sleeves to keep things organized.

For the outer shell and lining, I used 1000 denier Cordura nylon. It has a canvas-like weave on the front, and a urethane coating on the back side that helps keep water out. This stuff is extremely durable and is resistant to tearing and abrasion. Various versions and weights of this fabric have been used for outdoor and military gear for years. This is the first time I’ve used all synthetic materials. Normally I’m all about natural fibers (and still am), but I wanted to try something new. Plus, the fabric was a nice birthday gift from my mom, so why not! 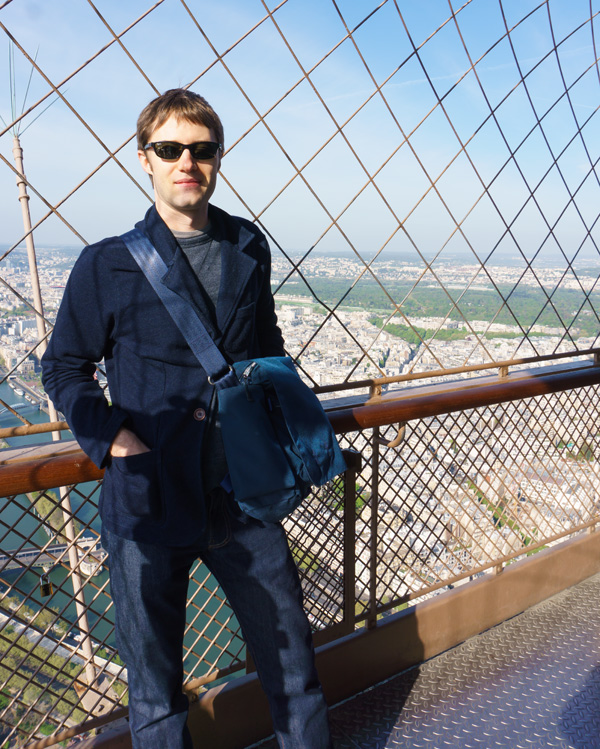 The new bag made it to the top of the Eiffel Tower! We were actually the very first people to the top of the tower that morning and had the whole upper level to ourselves for a little while. I was lucky to snag a couple of tickets in advance that had a time slot on them, which allowed us to skip the lines. I highly recommend this way of visiting the tower. You have to commit to a time slot 90 days in advance, and be willing to stay up really late or get up really early if you don’t live near Paris, as the tickets are limited and go on sale at 8:00 am Paris time. But it was well worth getting to skip the two-hour plus lines that quickly formed. Buy them directly from the Eiffel Tower website and not a tour company that charges a premium. 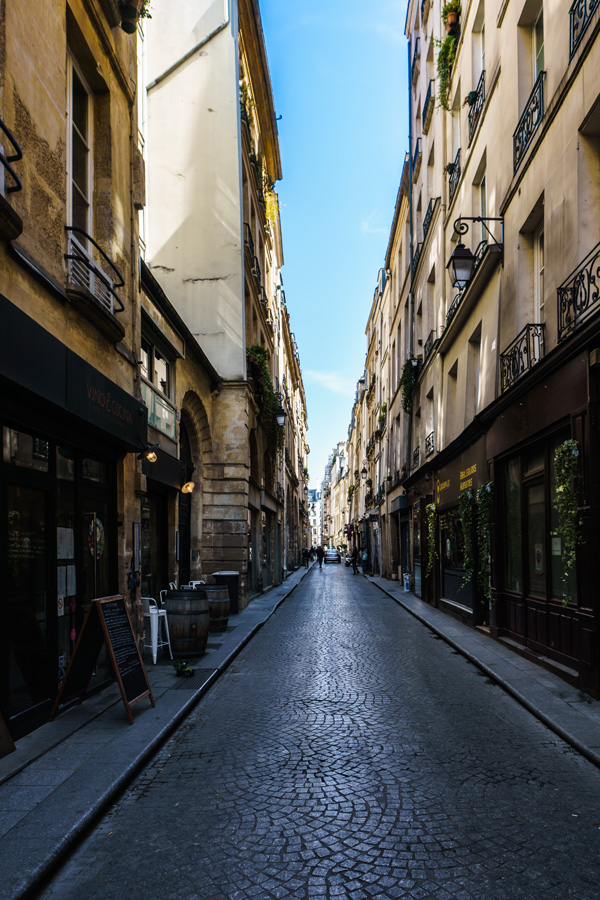 This was the street we stayed on in Paris, and it was pretty much everything I imagined it would be. Narrow, with lots of shops and interesting places to eat. 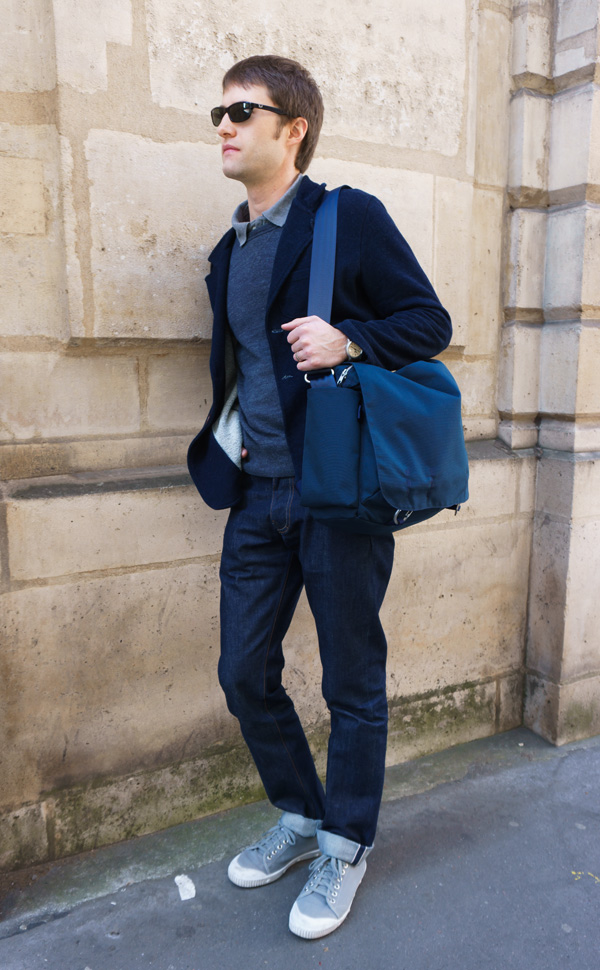 Me, awkwardly posing against a wall outside an amazing place that served chocolat chaud. This wasn’t like any hot chocolate I’ve ever had. It was really thick and tasted like a melted chocolate bar. The whipped cream was so thick it was practically butter. By the way, if it looks like I was wearing the same thing in every picture, I pretty much was. We were gone 13 days and I like to pack light. That means one pair of jeans. These jeans. 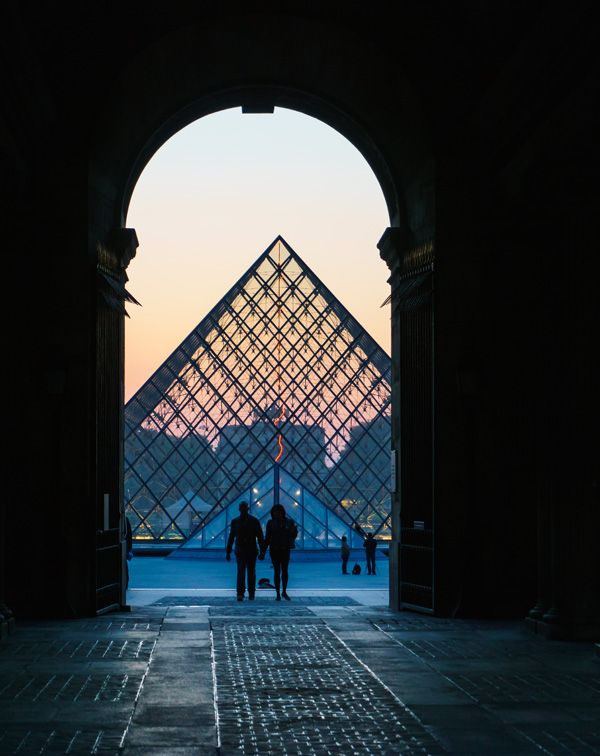 Paris, the city of love and lights. 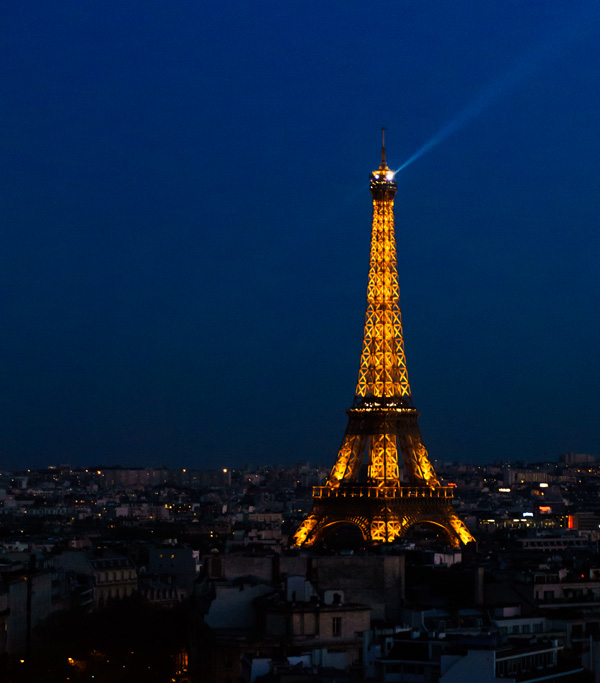 Between a “real camera” and my iPhone, I think I have a gazillion photos of the Eiffel Tower. Day time, night time, it begs to be photographed. 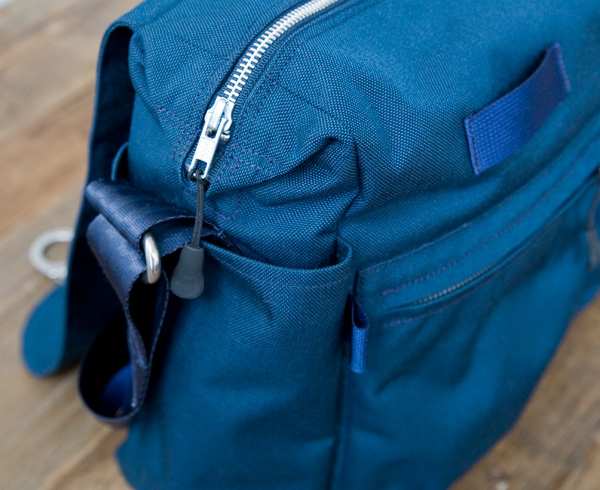 Back to the bag. Even though there is an over-the-top closure like a traditional messenger bag, I also wanted a zipper top to keep things from sliding out, and for a little extra security. Since the top of the bag is built in as extra height added to the side panels and end pieces, I needed a way to hold down the triangle flaps created by forming the “gusseted” top. On each end of the bag where the main zipper stops, I sewed in some really strong magnets to hold these flaps down. I could have stitched the flaps down, but wanted the option of lifting them up to make packing easier.

The magnets I used are actually too strong, and were very difficult to sew. They stuck to the bed of my machine and the feed dogs would not advance the fabric. I would probably change this aspect of the design for future bags.

Quite often people form the gusset and sew these triangle flaps with the bag inside out. As a result, the flaps are hidden on the inside. Leaving them on the outside, however, allowed me to make the zipper two to three inches longer. This creates a bigger opening facilitating packing and finding objects inside the bag. 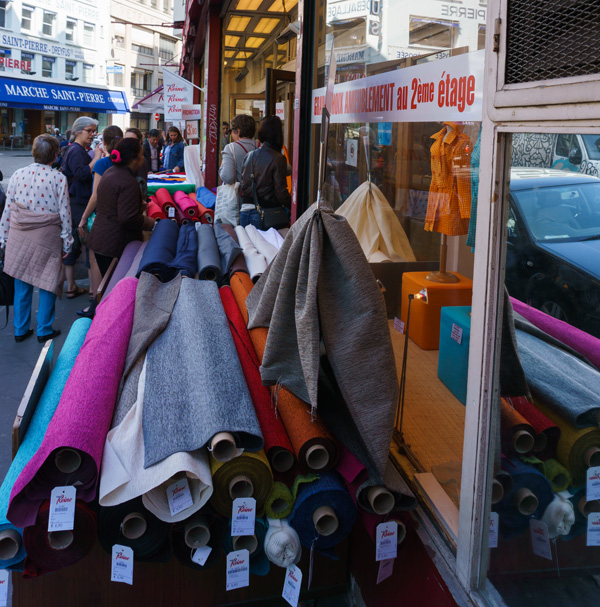 No visit to Paris would be complete without a trip to the fabric shops in Montmartre. There were quite a few shops clustered in this area with lots of fun fabrics. I wish I had had extra space in my suitcase to bring some home. Thanks to Milène at Micoton for all of her great fabric and site seeing suggestions in Paris. 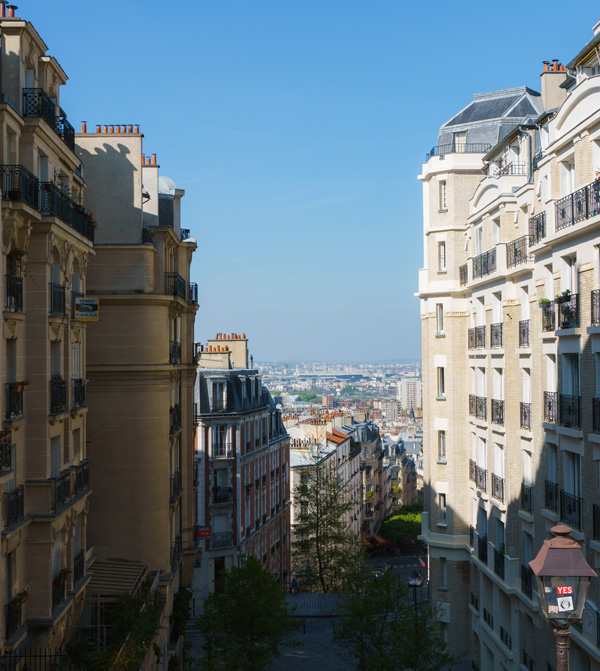 There were seemingly an infinite number of streets, alleys, hills, shops, and cafes to explore. More than enough for a lifetime of visits. I truly can’t wait to go back. After five days in Paris, we packed our bags and caught the high speed train to Barcelona. 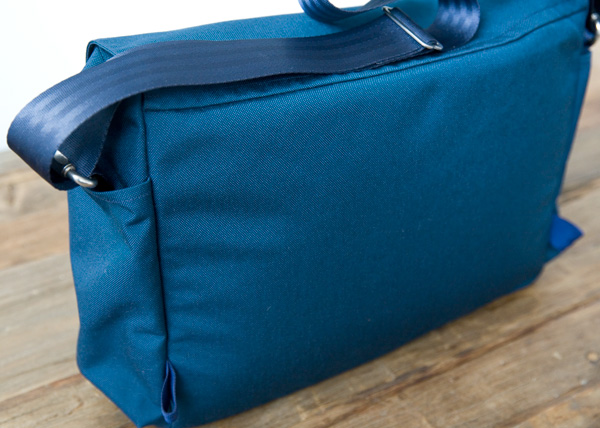 While the bag is primarily meant to be worn as a shoulder bag, because we were frequently climbing up in to trains and down into metro stations, and often had to carry our suitcases as well, I wanted the option to wear the bag like a backpack so it wouldn’t flop around if my hands were full. The back panel is made with a 1/4″ layer of closed cell foam sandwiched between the lining and exterior for structure and comfort. I also made two shoulder straps and sewed some extra webbing loops on the back/bottom corners of the bag. I can quickly attach a second strap with carabiners and wear it as a back pack if I want to. 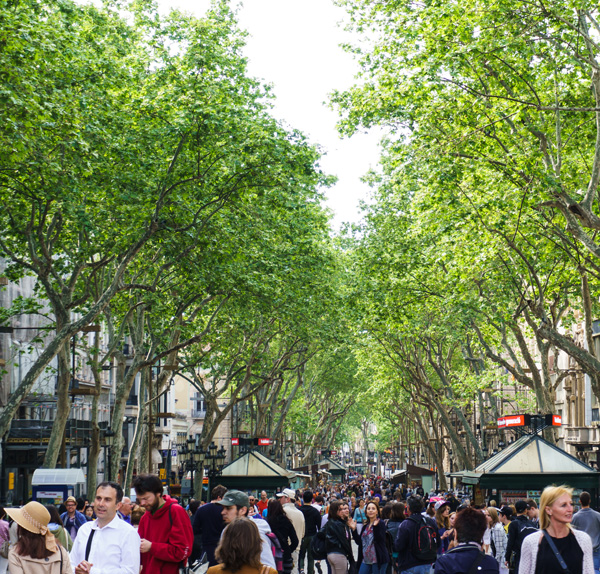 On to Barcelona. This is the famous La Rambla street, which was always packed with people. I was happy for my zipper top bag as this street is well known for its pickpockets. Luckily we had no issues at all in terms of safety or security. Both cities, Paris and Barcelona seem very safe, even at night. 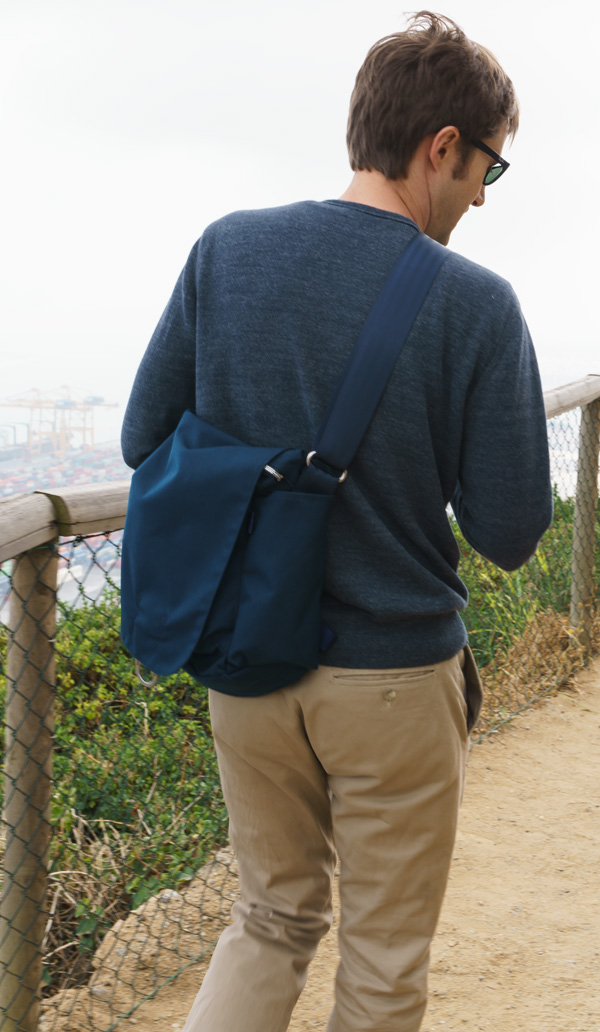 I used seat belt webbing for the shoulder strap, which was new to me. It was actually very easy to work with, and is quite comfortable to wear. This photo was taken outside the Montjuic Castle in Barcelona, which overlooked a huge port and shipping area. 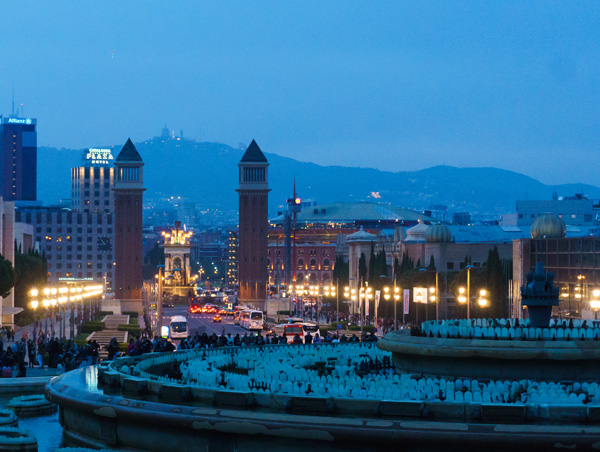 The Magic Fountain of Montjuic. This fountain lights up and does a lights, music, water show in the evenings. It was pretty spectacular, but I also like this view of the city with the fountains off. 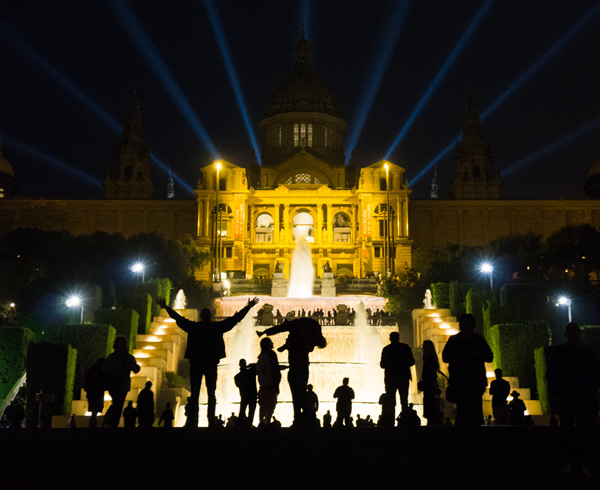 Directly behind the fountain show was this building, The National Art Museum of Catalonia. It also lights up during the fountain show. I love the guy with his arms raised to the sky, and the silhouettes of all the people gathered on the steps. 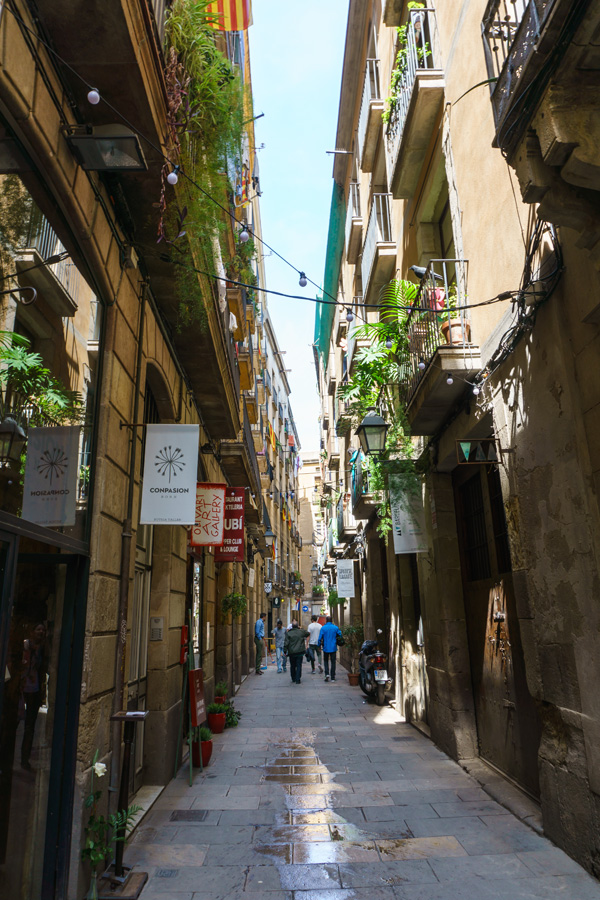 Similar to Paris, the old part of Barcelona was full of shops and tiny narrow streets to explore. 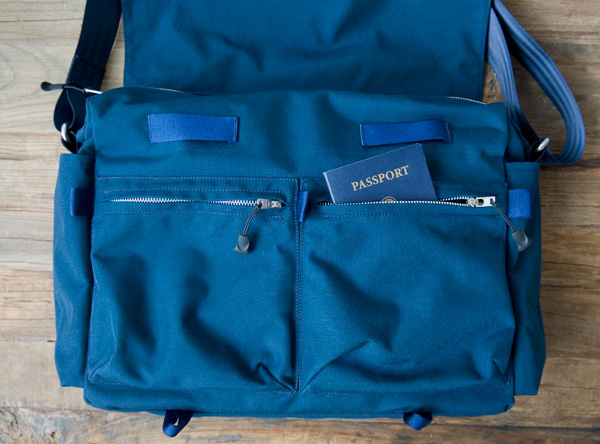 The inside of the bag has four zipper pockets in varying sizes. One that fits 8 1/2″ x 11″ sheets of paper or a magazine, one that fits passports, and two others for a first aid kit, snacks, and flashlight. The open pockets on the ends are designed to hold a water bottle or umbrella. 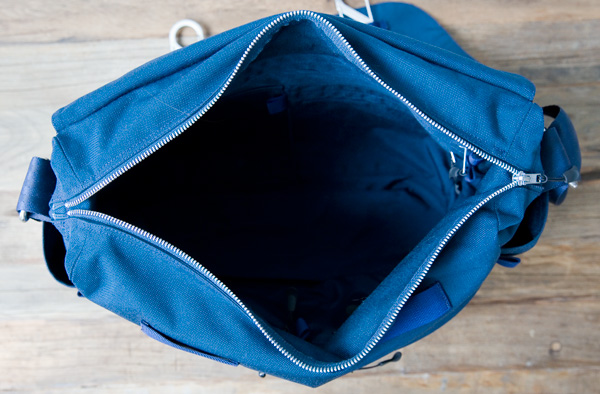 One thing I learned with this project is to try and use a light colored fabric for linings in the future. In low light, finding small things down in the corners of the bag can be a little difficult since I am basically staring down into a black hole. Maybe a lighter colored lining would help with this. 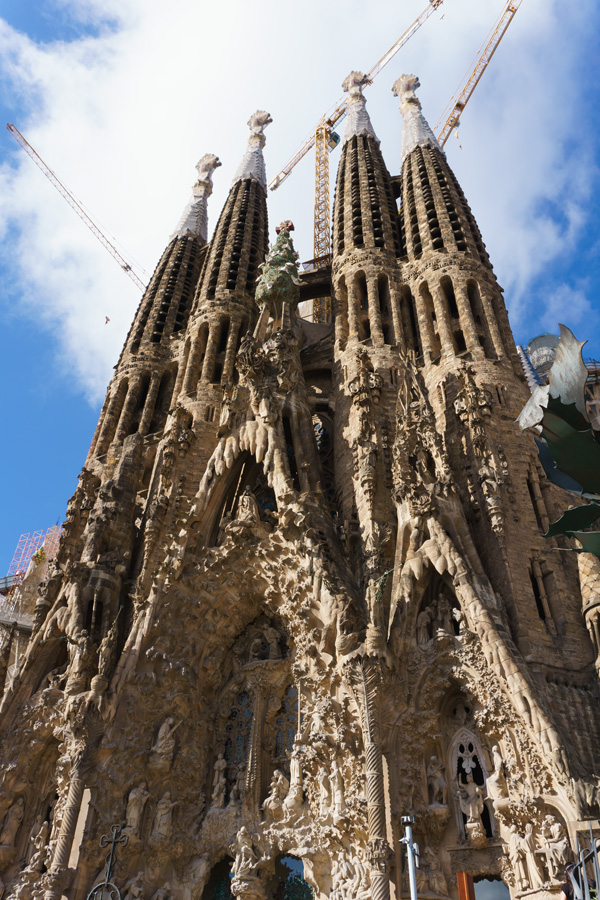 Some of the architecture in Barcelona is indescribable. Gaudi’s famous masterpiece, the Sagrada Familia. It is unlike any basilica I’ve ever seen. Construction began in 1882 and is still going strong. It won’t be finished until 2026. 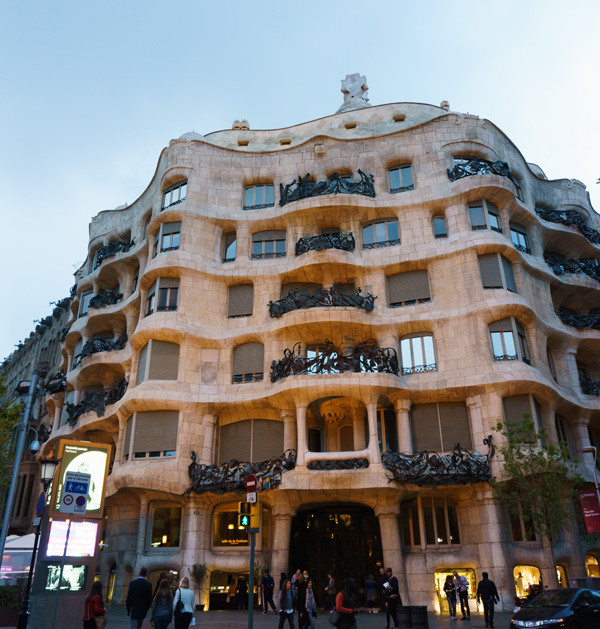 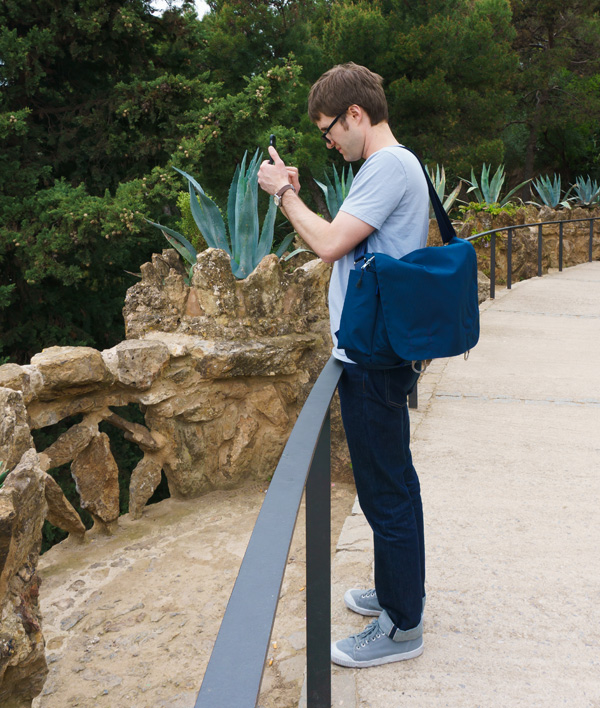 Overall, I am happy with the way this shoulder bag turned out. It was the perfect companion (other than my wife of course!) for running around the streets of Paris and Barcelona for two weeks. We were in and out of planes, trains, and a few automobiles, and I was really able to test the design out. There aren’t too many things I would change.

The dimensions are a little on the big side, but I looked at the size as sort of a compromise. It might be a little big as an ideal day bag, but the extra size allowed me to get away with only having a small carry-on size suitcase for the whole two weeks away from home. So in that sense, it had two purposes – just small enough that it can be carried around all day, but big enough to pack things that didn’t fit in my suitcase. 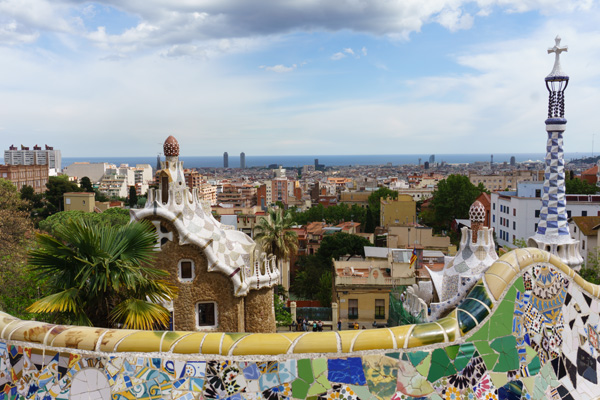 Gaudi’s Park Guell. If I could travel for a living, I would. Can’t wait to get out on the next adventure!

This post contains affiliate links which means I will make a small commission if you purchase through those links. I only recommend products that I know, trust and love!
Accessories Travel

24 comments on “Paris, Barcelona, and a New Shoulder Bag”